Calogera Ricottone was born in 1873.

Calagera (40) arrived in NY in 1902 with sons Salvatore (9) and Paolo (6) Sciabarrasi. They are listed as never visiting the U.S. before. Husband, Cataldo Sciabbarasi, is living at 17 Terrace St. The last residence is listed as Marianopoli.

Calogera passed away in Buffalo, NY at the age of 55.

Cataldo Sciabbarasi was born in 1871 in Sicily.

Peacock Street was located in this zone.

Cataldo (61) lived in Buffalo, New York, in 1930 at 35 Peacock and is listed asCataldo Sclabaressi.

Cataldo (65) lived in Buffalo, New York, in 1930 at 336 Virginia. He is listed as Cataldo Sciabaresi andCataldo Srlambarosl.

Cataldo (69) lived in Buffalo, New York, in 1940 at 77 Maryland St. (rear) with his daughter Jennie (26). He was a laborer and is widowed. He is listed as Cataldo Sciambarosi and Cataldo Scrabbarosi.

Cataldo disappeared on February 17, 1949, in Buffalo, New York, when he was 78 years old. His body was never found.

Stella (21) arrives in New York June 24, 1928. She sailed from Palermo, Italy on The Providence and arrived in New York.

Paolo ‘Sciabarrasi’ travels from Naples to NY on the Calabria with his brother, Salvatore, and Calogera Ricottone, his mother. He is listed as being born in Marianopoli. Father, Cataldo ‘Sciabbarrasi’ paid the ticket. They will be going to a residence on Terrace Street.

Paolo ‘Shabarrazo’ (12) is listed on the census as living at 182 Baker St. (no longer a street, First Ward 25) with parents, ‘Catarro’ and Calogera, brother, Sam, and sisters, Grazia, Pepina, Angela, and Vizenza. The immigration year is listed as 1901.

Paolo (31) traveled on the Giuseppe Verdi from Palermo to NY on Feb 28. His occupation is a laborer and he is listed as being born in Marianopoli. Immigration visa number 934. He is heading to Buffalo, NY.

Paolo (34) lived in Buffalo, New York, in 1930 at 313 Trenton Avenue with his wife, Stella, and children, Thomas and Carrie; he is a laborer in street construction.

Paolo (44) lived in Buffalo, New York, on April 1, 1940 at 105 Fourth Street with his wife, Stella, and children, Carol, Russell, and Carmi; he is a laborer and highest grade completed is Elementary school, 3rd grade.

Paul Sciabarrasi (46) is living at 535 Fourth Street. He was born in Marianopoli and works at Shirley Herman, located on Elmwood in Buffalo as a laborer. Hair color and eye color is listed as brown. Height is listed as ‘5’. Complexion is ‘dark brown’. 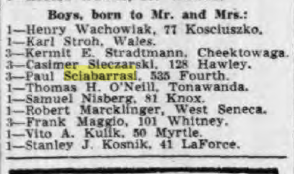 Paul is featured in the paper for having the birth of a son (possibly Paul Jr.).

Paolo died on March 24, 1952, in Buffalo, New York, when he was 56 years old. He was living at 6 19th Street.  The name, Laraiso, is also listed as the last name in his obituary, possibly because his father, Cataldo, was remarried or it was an old family name and they changed their name upon arrival. He was survived by his wife, Stella, and children, Carol, Russell, Carmen, and Paul Jr., as well as siblings, Sam, Mrs. Pat Lo Patriello, Mrs. Josephine Inserra, Mrs. James Ricattone, and Jennie Sciabarrasi. He was a member of S. Benedetto Society and Club Avilglanese. 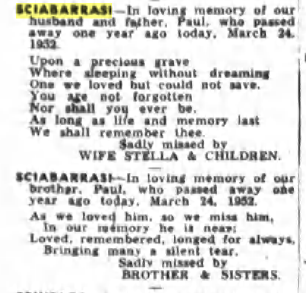 Russell was 2 years old and lived in Buffalo, New York at 105 Fourth Street.

Russell was 6 years old and lived in Buffalo, New York at 105 Fourth Street. 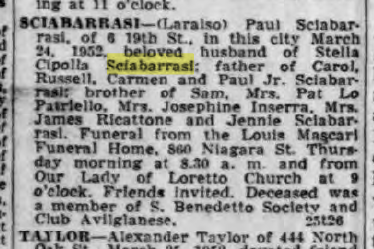 In Summer of 2017, my grandmother told me stories about my grandfather. She met him at a local bakery. She really wanted to be a nun and didn’t take an interest at first. He pursued and she finally married him. They had 6 children, and she could have had more. My grandfather asked about where she was buying peppers and told her my great-grandfather had the best peppers at his shop. 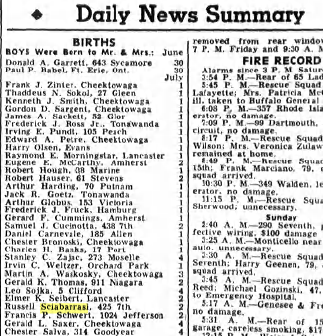 Russell was featured in the paper for the birth of his son, John, my father. He was living at 425 7th Street (now a lot). 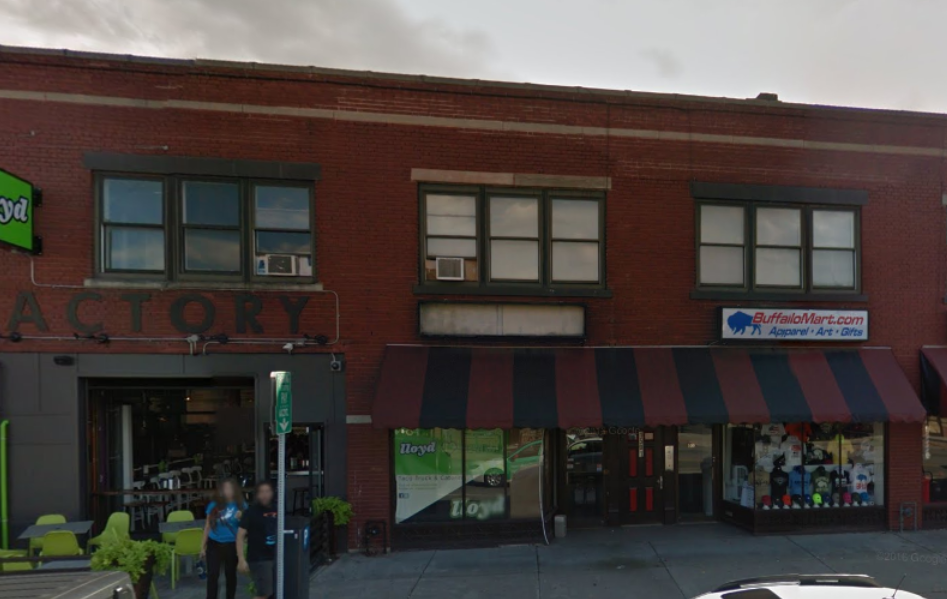 At age 30, Russell applied to open a pizzeria (La Strada Restaurant) at 1503 Hertel Ave (near the now popular Lloyd’s Restaurant) with Peter Cefalu (probably a cousin). Russell was living at 211 Crestwood at the time. 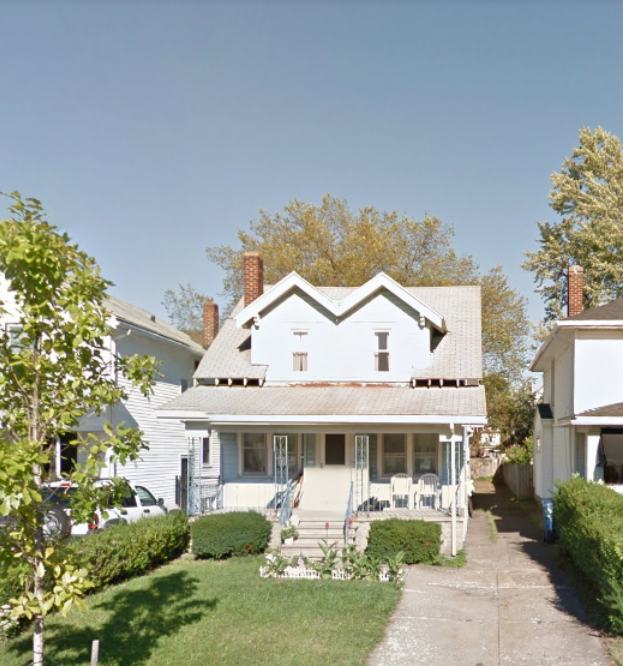 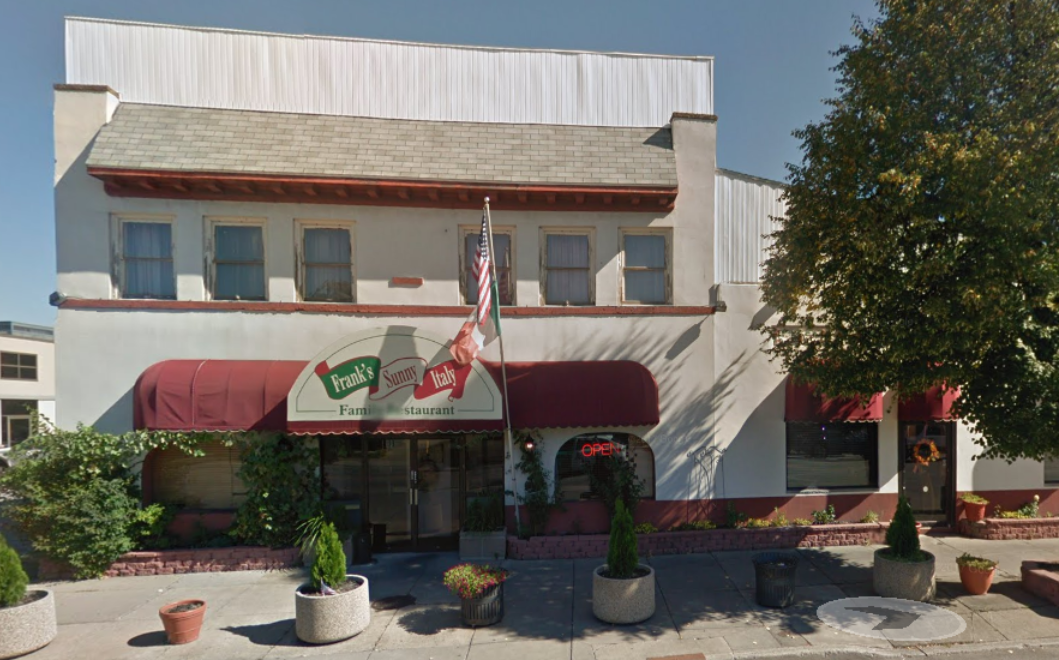 Russell applied to open a pizzeria (Brothers 3 Pizzeria) at 2491 Delaware Ave. with sons, Russell, Paul, and Frank. It is now the home of Frank’s Sunny Italy.

Russell died on March 24, 1977, in Buffalo, New York, when he was 43 years old and is buried in Mount Calvary Cemetery, in Buffalo, NY. He had onset diabetes and his doctor knew he would pass away before he did because he was experiencing so many signs of death. Later, the doctor told my grandmother that he knew but that he didn’t say anything because he didn’t want to upset my grandmother or the family. Back then, they didn’t really know how to treat diabetes.